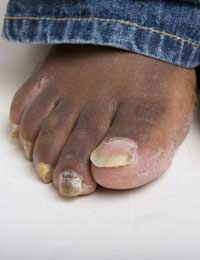 A fungal infection of the nail usually will start out at its outer edge and then slowly travel inward to the base of the nail. The nail will appear whitish and thicken and may become crumbly. It may hurt when pressed upon. Toenail infections usually involve the big and little toes. Nail infections of the inner toes are less common. When fingernails are involved usually several fingers of the same hand become infected. Fungal nail infections on either the fingernails or toenails rarely lead to serious health consequences, however they can be quite embarrassing, and make the appearance of the hands and feet decidedly unattractive. Nail infections are not heredity, but they do tend to run in families. This is not due to any genetic factors, but is more likely due to common exposure, and family members spreading the infection back and forth to one another.

Fungal nail infections will not clear up on their own as a case of athlete’s foot may. However not all such nail infections require treatment. Some people are not at all bothered by minor nail infections, especially of the toenails, and just live with it. However if the infection is causing you significant pain or embarrassment there are treatments available. Nail infections may be caused by the same fungus as athlete’s foot, but they are seriously harder to treat. There really are not any over-the-counter creams or powders that can be applied to the nail to kill the fungus as there are for athlete’s foot. With a nail infection the fungi are imbedded deeper below the surface and not just on the skin as in other fungal infections. Oral anti-fungal medications are available and are effective in clearing up a nail infection, but they usually need to be taken for several months. Before starting you on oral anti-fungal medication your doctor will take a scraping from below your nail to confirm that you indeed have a fungal nail infection, and what type of fungus it is.

Once properly diagnosed and the appropriate medication prescribed almost 90% of the cases of fungal nail infection can be completely cured.