Home > Other Problems > Loss of Libido 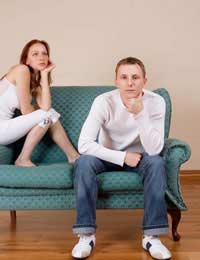 Loss of libido or the sex drive is far more common in women than men, however decreased sexual appetite does effect both sexes. The are many factors that can influence a loss of desire for both men and women. However no matter which partner is suffering from decreased interest in sex, loss of libido can wreck havoc on any intimate relationship.

Except in rare instances where it is the direct result of some kind of disease state such as certain cancers, or injury to the sex organs, loss of libido usually does not happen spontaneously or overnight. Loss of libido occurs gradually over time. Doctors describe loss of libido as loss of interest in sex for at least a few months out of the past year.

You may be experiencing a loss of libido if you can answer “yes” to a majority of the following:

Loss of Libido in Women

Loss of libido is reported by women far more often then by men. In the United States the American Medical Association has estimated that several million US women suffer from the condition that doctors there have labeled “female sexual arousal disorder” or FSAD. In The UK no formal studies on the number of women suffering form FSAD have been done, but some estimates have said nearly half of the women in Britain report some level of lack of sexual desire. Yet that number seems more likely put out by the mates at the local pub. Based on estimates of women seeking help for lack of libido at family planning centers and Relate Clinics, it seems that at any given time there are at least several hundred thousand women in the UK that are experiencing loss of libido.

Loss of Libido in Men

Losing interest in sex may only effect about 15 –16% of men. Lack of libido is therefore far less common in men than women, but it can be also be far more embarrassing or devastating for the male in a relationship. In our society so much of a man’s masculinity is tied up in sexual prowess, that a loss of sexual desire can be very emasculating, and emotionally compromising for men.

Causes of Lack of Libido

For both men and women, lack of libido has either physical or emotional causes. Some physical and of course many of the emotional causes can over lap, but the specific physical causes for loss of sexual desire in women can be:

Contrary to popular belief menopause does not cause a lack of libido in most women. In fact many women report a much more satisfying sex life after menopause.

Again while there are certain emotional factors that can lead to decreased sexual desire in men or women there are some emotional or psychological issues more likely to cause women to experience a loss of libido. Such as:

Factors That Can Effect Either Sex

Treatments for Lack of Libido

Since the reasons for a reduced sex drive can be so varied for both men and women it is difficult to discuss the many effective treatments available. The good news is that once the cause is determined usually loss of libido can be reversed. For that reason it is advised that if you feel you are experiencing a loss of libido discuss the condition with your physician. Through diagnosis, cooperation by your partner, perhaps medication, and emotional counseling – you can likely return to an active and healthy sex life.

What Causes Worms and How are they Treated?
Share Your Story, Join the Discussion or Seek Advice..
i have heard that in some cases some men encounter a lack of desire to have sex with their wives after they give birth and this can last for a long period of time, in some case years do you know where i can find some articles about this Thank you in advance
mike - 20-Apr-11 @ 4:48 PM
Title:
(never shown)
Firstname:
(never shown)
Surname:
(never shown)
Email:
(never shown)
Nickname:
(shown)
Comment:
Validate: