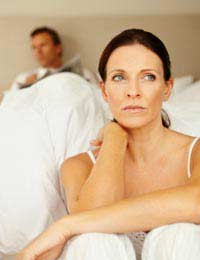 Causes of Bleeding During Intercourse

There are many things which can contribute to a woman bleeding during or after sex. Vaginal tears so small that they may not be seen (also known as “micro-tears”) may occur during intercourse which result in bleeding. Such tears may be internal or on the external vulva. Tears may not occur as a result of intercourse, for example they may have been caused by tampon use or masturbation, but the friction of intercourse may cause them to bleed. Polyps or fibroids growing in the uterus may cause bleeding during intercourse, as may an STI such as chlamydia or gonorrhoea. Vaginitis, an inflammation or infection of the vagina, could also be a culprit. Thrush/yeast infections could cause bleeding during intercourse, as could cervical dysplasia (pre-cancerous changes to the cervical cells). Less common, but still possible, could be blood which appears to originate from a woman but is really in her partner’s semen, and therefore indicative of his health and not her’s.

Bleeding during intercourse will be treated according to the root cause. For example, giving micro-tears time to heal and then ensuring adequate lubrication during intercourse should help defend against future episodes. Treating STIs and vaginitis according to the type and cause, often with pharmaceuticals, should also help minimise and eradicate bleeding during intercourse. Polyps and fibroids will be investigated and are often removed surgically, while thrush/yeast infections may be able to be treated with over the counter medicine. Cervical dysplasia, or the presence of pre-cancerous changes to the cells of the cervix, is often treated with cryosurgery (the use of extreme cold to treat the cells) or conisation (a type of biopsy which surgically removes cells from the cervix).

Seeking Help for Bleeding During Intercourse

Bleeding during intercourse is very often a symptom of another health condition so it is imperative that you do not ignore this warning sign. Call your GP as soon as you notice blood during or after sex, or your midwife immediately if you are pregnant. Medical professionals will have dealt with this type of problem before, and there is no reason for you to feel embarrassed or ashamed. Your body is trying to tell you something, so listen to it.

There are many reasons a woman may experience bleeding during or after intercourse. Understanding that such bleeding is often a sign of another health problem is important to getting available treatment as soon as possible. Don’t let embarrassment keep you from looking after your body and your health.