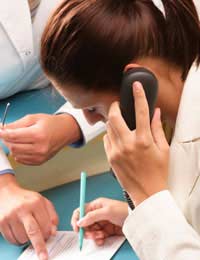 Why then are they so prevalent? Because let’s face it sex is a very popular activity, and despite the wealth of information we have learned about preventing the spread of STI’s people often fail to take proper precautions against transmission.

STI’s are equal opportunity offenders. You do not have to be of a specific race, creed, color, or religion, or from any one particular socioeconomic group to contract an STI. So for that reason, and the fact that some STI’s can be seriously life threatening, if not life altering such as HIV/AIDS, everybody needs to take STI’s seriously.

There are numerous STI’s. As you will see many of them have the same or similar symptoms, yet pose varying degrees of health risks. For this reason if you suspect that you have contracted an STI, it is imperative that you see a doctor for proper diagnosis, treatment, and notification of your sexual partners.

Here is a list of some of the most common STI’s you are likely to encounter of you are sexually active and in a non-monogamous relationship.

Chlamydia - Chlamydia is the most common of the curable Sexually Transmitted Infections. It is a common bacterial infection that in men effects the urethra and penis, in women the area in and around the cervix and the vagina.

Most common symptoms of Chlamydia are pain when having intercourse, or burning sensation when urinating. For women it can be accompanied by vaginal itching, discharge and unpleasant odor. Men may also experience a discharge.

Left untreated Chlamydia can cause damage to a women’s reproductive system, and therefore should be taken seriously. Chlamydia responds well to oral antibiotics and is easily cured with them. Chlamydia can be prevented by the use of latex condoms.

Gonorrhea – Which you have no doubt heard referred to as “the clap” is another common bacterial STI. In general it infects the sex organs the same way as Chlamydia, and has similar symptoms and similar long term effects.

Also like Chlamydia a person with Gonorrhea can go on for weeks or months without exhibiting symptoms and therefore know that they have been infected. Like Chlamydia, Gonorrhea can be treated effectively with several antibiotics, however in recent years several strains of drug resistant gonorrhea have been surfacing. Condoms, when used correctly can reduce the chances of contracting or transmitting gonorrhea.

Syphilis – Syphilis is probably one of the most notorious sexually transmitted infections in history. And rightly so, before the discovery of penicillin it was a scourge that took the lives of millions. Caused by the bacterium Treponema pallidum, if untreated syphilis can lead to serious complications even death.

The symptom that differentiates syphilis from most other STI’s is the characteristic appearance of sores or chancres, in and around the genitalia, mouth, or anus. It is through direct contact with these sores that syphilis is transmitted. And that is why the use of condoms is only somewhat effective in preventing transmission, as they may not prevent contact with all sores.

Syphilis in its early stages can be cured with a single injection of penicillin. In its later stages multiple doses may be necessary. For those allergic to penicillin there are other antibiotics that can treat syphilis. If you suspect you have been exposed to syphilis the earlier you seek treatment the better. Untreated syphilis is a progressively worsening, painful, terminal disease.

Human Papilloma Virus - HPV could be considered the most common Sexually Transmitted Infection. A study conducted in the US in 1997 estimated that almost 75% of sexually active adults has been infected with HPV at some point during their lives. A similar study released just this year found that 25% of women are infected with HPV at any given moment, many of them unaware of it. HPV has come into the public consciousness of late because of its known link to some kinds of cervical cancer, and the release of a proven to be effective HPV vaccine.

Pubic Lice – Also known as "Crabs". Pubic lice infest the genital area and occasionally other hairy parts of the body. They are usually spread by sexual contact, although they may be transmitted by coming into contact with infested bedding and cloths. Delousing with a topical medication containing Permethrin or Pyrethrins is the usual treatment for pubic lice. Though related, pubic lice are not the same thing as head lice.

Herpes – Like HPV is an STD caused by a virus. There are two forms of Herpes, Herpes Simplex Virus 1 and Herpes Simplex Virus 2. HSV1 is most often associated with cold sores around the mouth. HSV2 is the version of the disease more often referred to as genital Herpes. Keep in mind however that it is quite possible and common to transmit herpes from the genitals to the mouth and vice versa.

Over the years there have been developed some very effective anti viral treatments for herpes, but there is still no cure. People with genital herpes need to understand that they can still transmit the infection even when no sores are present. Condoms are only partially effective in preventing the spread of herpes as it can be spread via skin-to-skin contact.

We could not have a discussion of common STI’s without mentioning HIV/AIDS. Though maybe not as common in the UK as are the other infections mentioned, largely due to public awareness, in many parts of the world HIV/AIDS is still taking lives on a grand scale. Still, especially in the industrialised world HIV is not the death sentence it once was.

In the UK HIV today is far less likely to develop into full blown AIDS than in years past. There have been developed many effective drug combinations, which are allowing people infected with HIV to live relatively long and normal lives.

The only way to 100% prevent exposure to STI’s is through abstinence. Other than that limiting sexual partners, and the use of condoms can help control the spread of most STI’s.