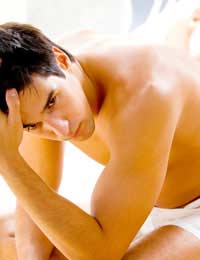 Peyronie's Disease A Common Penis Problem
Peyronie’s disease, also called curvature of the penis, is a very common often-embarrassing penis problem. It is perfectly normal for most if not all penises to bend slightly to one direction or another. In a man with Peyronie’s Disease or a curvature of the penis the bend is significantly more pronounced. So much so that it can be embarrassing to potential sexual partners, sometime even making sexual intercourse painful or impossible.

What Causes a Curved Penis?
The tendency of the penis to point slightly in a direction other than straight ahead when erect can be just a congenital and benign condition. However, in the person with Peyronie’s it is fibrous plaque, or hard nodules below the surface of the penis that cause it to bend in a direction away from the lumps. There can be pain associated with the disease, but not too often. And when the patient with a curvature of the penis due to Peyronie’s does experience pain, the pain generally subsides on its own after a few months. Peyronie’s can effect men of all ages and races, but for some reason it seems to effect more Caucasians over the age of 40 than other groups of men. The condition is most benign. It is not cancerous nor can it lead to any kind of cancer. However it is often associated with varying degrees of Erectile Dysfunction, (ED) ED associated with Peyronies’ is sometimes physical and sometimes psychological because of the perception of having a disfigured or “funny looking” penis. In some case of extreme curvature, men report being unable to have sexual intercourse, while others can function just fine with a curved penis.

There is also thought to be a genetic link to the problem of a curved penis from Peyronie’s Disease. While no specific gene has yet to be identified it does seem that the condition runs in families.

Treatments for Peyronie’s Disease
For the most part Peyronie’s Disease or a curved penis, is little more than a nuisance. It is benign, and usually not painful. However if the curvature is such that it is painful, causing you difficulties in sexual performance, or just makes you embarrassed and uncomfortable, there are treatments available that can correct the problem.

Traction Devices, Penis Extenders, and Vacuum Pumps
While no long-term clinical trials have been done there is mounting anecdotal evidence that such devices of which there are a plethora available on the Internet do have some value in correcting the curvature of a penis caused by Peyronie’s Disease. Basically these devices use either traction or gentle vacuum action to exert continual longitudinal pressure on the plaque. Men who have used such devices have reported not only a decrease in the curvature, but also an increase in the length of the penis.

The only clinically proven method to completely correct the curvature of the penis caused by Peyronie’s Disease is surgery. Only a qualified urologist can recommend and perform such surgery. Other medical methods available to a urologist to straighten a curved penis due to Peyronie’s Disease include certain oral medications taken to reduce inflammation, and injections directly into the site of the plaque to reduce or eliminate it.

While Peyronie’s Disease rarely poses any life long medical threat, it can have severe psychological consequences for men with the condition. Depression, embarrassment, lack of interest in sex, withdrawal from sexual partners are all not uncommon in a man afflicted with a severe curvature of the penis. For these men it is advised that they seek medical help, it may be embarrassing to share this condition even with a doctor, but it can be corrected.

What is Causing My Testicular Pain?

Premature Ejaculation and How to Treat It

Impotence and How to Treat It

Baldness: What Can I Do About It?
Share Your Story, Join the Discussion or Seek Advice..
I have always had a curved penis and have read about Peryones disease,however ;last week I noticed while experiencing a very hard erection, that I have developed a very sharp angle in the left side of the shaft about an inch and a half above the base. Hard erections are rare for me although I do get bi-monthly testosterone shots { I'm 63 }There is no pain and all other functions are fine. It is not a curve , it is a definite "crook"that has me concerned. Your input would be greatly appreciated.
TexMac - 2-Feb-13 @ 8:51 PM
Title:
(never shown)
Firstname:
(never shown)
Surname:
(never shown)
Email:
(never shown)
Nickname:
(shown)
Comment:
Validate: