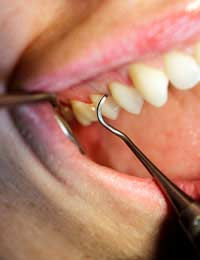 Receding gums, more technically know as gingival recession, is a condition in which gum tissue is lost and the roots of the teeth are then exposed. Many people are embarrassed about receding gums and feel that their smiles become too “toothy” and the general look of their mouths become wrong. If you are faced with this condition learn what you can about the causes, symptoms and treatments so that you can make the most informed decisions about how to proceed.

Gingival recession may have many causes. Some of these causes you may have been able to prevent while others you would have had no control over anyway. Known causes of receding gums include:

Receding gums may happen to all teeth at the same time, though generally there will be some symptoms apparent on just a few teeth to start. Recognising these warning signs, seeing a dentist and stopping any harmful behaviours is imperative to halting the aspects of gingival recession over which you have any control. Symptoms of receding gums to watch for are:

Receding gums can be embarrassing but there are ways to cope with this condition once you recognise it. Understanding the common causes, symptoms and treatment options will allow you to make the most informed decisions possible about your receding gums.