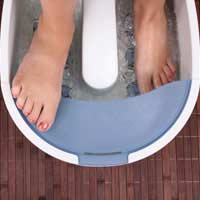 Verrucas or Plantar Warts are not related to touching frogs but women, men, and children who have a wart may worry that their appearance is frog-like. Whatever body part a wart may appear on, hands, face, neck, feet, they can be a cause of some trouble, and, if on the feet as in the case of verrucas, discomfort and pain. But, the good news is they are not dangerous, and treatments are often simple—beginning with—do nothing!

Where Does a Verruca Come From

Anyone, at any age can get a verruca, officially called verruca vulgaris—which sounds a bit ugly in itself. Verrucas are small, harmless growths on the skin, appearing anywhere, coming in all sizes and shapes and colors from smooth and flat to big rough bumps to little clusters. Though technically a verruca refers to any type of wart, in the UK the term verruca is usually applied to a Plantar Wart or warts of the feet, and that is how we will refer to it here.

Verrucas are caused by the Human Papilloma Virus. The virus is just about anywhere and enters the skin from direct contact. Often this virus is kept alive in warm and wet environments such as locker rooms and can enter an area of recent injury or crack in the skin. Whether or not you get verrucas seems to depend on your immune system or sensitivities. Verrucas are a bit of a common problem as 7-10 percent of people has had them, some people get them over and over again.

What to Do about Verrucas

Don’t do anything at all, or just cover the verruca with a plaster. A foam pad can relieve some discomfort on the foot. 90% of verrucas are gone within 2 years, half of them disappearing within 6 months. It is believed that the body naturally deals with a verruca by gradually building up resistance. If you let a verruca heal by itself, you may be less likely to get others, as your body will become immune to that virus.

What Not To Do About Verrucas

Health experts caution not to try using a knife to scrape a verruca. Your skin could be damaged, an infection caused, and the verruca may reappear in the damaged area.

Dealing with a verruca is a bit interesting in that the idea is to have your body recognize the verruca as foreign and to destroy the verruca virus just as with a cold virus.However, it is usually recommended that you have your doctor check your verruca before you use any home treatment, especially for verrucas on the foot. Corns, calluses and verrucas can sometimes be hard to tell apart. If you have diabetes or a skin problem such as eczema you are recommended to see a doctor.

Acid Treatment - Salicylic Acid is the most commonly used over the counter treatment for verrucas with the most successful reported results. This acid is available in many brand names and comes as either a liquid to be painted on or a plaster to be cut out and placed on the verruca with a daily application. The treatment plan involves soaking the verruca area in warm water for about 10 minutes, rubbing the verruca with a pumice or emery board, protecting the skin around the verruca with petroleum jelly and then applying the acid and covering with a Band-Aid or tape. Always follow package directions for length of time to apply the acid. The process continues taking down the verruca until the area looks like normal skin.

Adhesive Tape -In a recent study using duct tape, about 7 in 10 verrucas were reported to disappear within 2 months. Taping usually works best in fingernail areas. Waterproof tape is placed over the verruca and left on for 6 ½ days, removed and left open to air for 12 hours, then taped again for 6 ½ days. With kids, changing the tape every day or other day is recommended.

Herbals - Some people find herbal remedies to be effective such as tea tree oil and garlic juice, or Chelidonium is said to have antiviral properties.

Cryotherapy -This is a freezing treatment that is popular with many people. Your doctor commonly uses liquid nitrogen by swab. The treatment is usually repeated for a few months, requiring up to 4 treatments. Evidence has shown that eliminating a verruca with freezing is quicker than with acid, but it can be painful, and there is a risk of scarring. A similar type of cold spray is available from pharmacies for self-application. It can be used on verrucas of the foot, but is not recommended for the face or elsewhere.

Lasers -This is use of intense heat to vaporize the virus. With lasers, there can be some risk of scarring.

Surgical Removal - The doctor numbs the area and removes the verruca.