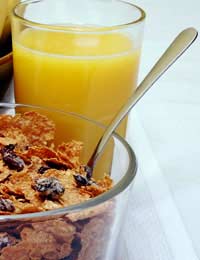 By medical definitions your are constipated if you have less than three bowel movements in a week. This has been euphemistically described as “irregular”. There really is no rule that says you need to have a movement everyday, although some people think so. Diet and activity level all effect bowel movements. Generally your body will find a routine of “regular” bowel movements that is right for you based on your individuality. But even going for a single day with out a “regular” bowel movement can be distressing and uncomfortable for some people. However long you have been constipated, whether it has been days or just a few hours, being constipated can make you feel bloated, slow, sluggish, “plugged up” or just plan miserable.

Fiber Rich Veggetables
Grains and Cereals
There are several varieties of beans that are also high in fiber, kidney and lima beans for example. Avoid eating too many foods with little or no fiber such as cheeses, pizza, white processed breads, ice cream and mashed potatoes.

Keeping yourself properly hydrated with water or fruit juices can also help to avoid constipation, as will regular exercise. Check with your doctor if you have recently been taking any new medication. Some common medications including calcium pills and antacids can cause constipation, as can some prescription medications.

Treatments for Constipation
Increasing the amount of fiber to the diet is usually all it takes to clear up a bout of constipation. If adding more fiber to your diet has not been enough to “get things moving” again, there are many treatments available for constipation. The most common treatment for constipation that does not respond to changes in diet is to use a laxative. Laxatives should only be used after other methods have been tried and failed. “Natural” laxatives such are nothing more than bulk fiber, and will just do the same thing as eating more fiber, albeit perhaps a little quicker. A true laxative is a medication that will make the body pass a stool. A medicinal laxative should not be used without the advice of a doctor or pharmacist.Alternative treatments include:

On rare occasion constipation can be indicative of a serious underlying health problem such as an impacted or obstructed bowel, gastrointestinal tumors, or irritable bowel syndrome. Your physician would only suspect such conditions after the traditional treatments mentioned have failed to relive the constipation. X-rays or other diagnostic tests would then be ordered to confirm a diagnosis. But for the most part a bowl of Bran cereal, a glass of fruit juice, and some exercise are all it takes to get things moving along again.