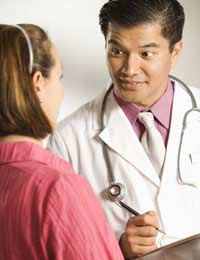 Functional Incontinence – is a condition where people have lost the ability to recognize the need to urinate. It is the least common and usually due to dementia, Alzheimer’s or other cognitive difficulties. Being physically unable to get to a bath room in time due to mobility disorders, is also a form of Functional incontinence.

Only a medical professional that specializes in diseases and disorders of the Urinary Tract can properly diagnose and treat incontinence. For men that means a Urologist, for women that usually means her Gynecologist, however there is a subspecialty of OB-GYN’s who specialize in the female urinary tract called urogynecologists.

The first thing a doctor will do when attempting to diagnose if indeed you are “incontinent” and if so what type of incontinence you may be suffering from, is take a detailed history. Only by fully understanding what your “normal” pattern is for urination, will he be able to determine if there is a problem. A physical examination will be made for any signs of obvious problems such as an enlarged prostate or any growths or tumors that could be interfering with the proper flow of urine. A urine analysis will of course be taken to check for any infections and for proper kidney function. Additional diagnostic tests may be performed such as a test for stress incontinence where you will be asked to stand still and cough vigorously while the doctor checks for signs of leakage.

Exercises: Certain exercises for men and women such as Kegel exercises, and only for women such as Vaginal Cone Therapy, have been developed that have been shown to strengthen the muscles of the pelvic floor.

Biofeedback – Which uses techniques to help a patients better recognize the need to urinate.

Prescription Drugs – The is a wealth of prescription medications proven to be safe and effective for treating many different forms of incontinence.

Pessary Ring - A treatment for women, in which a ring is placed within the vagina to help “hold back” the bladder.

Surgeries – Your doctor has many surgical techniques available to deal with incontinence such as repositioning the bladder and insertion of slings.

Any kind of incontinence can be a very embarrassing condition for adults. Urge or stress incontinence can have a severe impact on lifestyle. But there is no reason to suffer in silence or keep building your life around the nearest bathroom because help is available.